Lucasfilm, the Disney subsidiary and owner of the world-famous Star Wars franchise, is making headlines this week after filing suit against “Lightsaber Academy,” a school of Jedi swordplay. Lucasfilm’s complaint, filed in California federal court on October 14, targets Michael Brown, the operator of Lightsaber Academy, Thrills and Skills, and New York Jedi. Brown and his three enterprises are accused of trademark infringement, unfair competition, and cybersquatting, among other claims, to the tune of over $2 million in damages. Lucasfilm Ltd. LLC and Lucasfilm Entertainment Company Ltd. LLC vs. Michael Brown, Case 3:16-cv-05968 (N.D. Cal.).

Attack of the Clone Logo

Lightsaber Academy offers several classes and certifications in the way of the Jedi, including martial arts, lightsaber swordplay, and stage combat skills. According to the complaint, Brown has infringed multiple trademarks owned by Lucasfilm, including “JEDI”, “LIGHTSABER”, and the Jedi Order Logo, compared below. 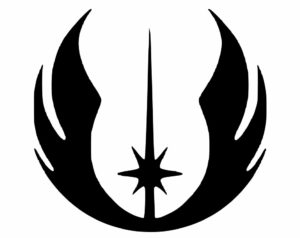 Lucasfilm didn’t need to resort to any Jedi mind tricks to detect Brown’s activities. The complaint alleges that Brown alerted the company himself by repeatedly seeking (and being denied) licenses for his continuing uses of Lucasfilm intellectual property.

Lucasfilm states that it served Brown with multiple cease and desist letters, to which Brown responded by filing his own trademark applications for the allegedly infringing logo and another design featuring the name “NEW YORK JEDI.”

Brown may decide to set forth a fair use defense to infringement. While the doctrine of fair use is a vital limitation on trademark rights, there is a fine line between fair use and infringement. The need for case-by-case analysis makes it nearly impossible to be certain in advance that a use is a fair use. Even if Brown eventually prevails against Lucasfilm’s claims, he will still have to bear the immense costs of defending a lawsuit against one of the most powerful companies in the industry.

Stay tuned to find out whether the Force will be with Brown, or with the Jedi legal team over at Lucasfilm.